Colossus was the first game that I created with a team of 5 people. Usually during game jams I worked together with two others, but this time we had a slightly bigger team. Which was another experience on itself. The game jam itself was also bigger than something like Ludum Dare which lasts for 48 hours. This game jam lasted for a whole week, in which we could get a lot more done, even though we all still had to do University work in between.

The goal of the game jam was to breath new life into the first person shooter genre, which had become quite stale over the years. This was especially the case in 2014, the year of the game jam in which we participated. (You can find more on the 7DFPS challenge here). We aimed to achieve this goal to look at one of the worst parts of first person shooters which we would be able to improve or iterate upon. It was decided that we were all of the opinion that boss battles in FPS games were not very well designed nor implemented. We aimed to create a game which delivered on creating an amazing boss battle experience for the player. We looked for inspiration to other games which delivered great boss battle experiences and came to two very impotent influences which we drew ideas from. These were Shadow of the Colossus and the Metroid Prime series.

Concept art for the colossus, created by me for Daniel van Pel

The concrete idea was to create a relatively large landscape which people would use to travel in between the dungeons. These small dungeons would train the player on skills, which would then be tested by the boss in that particular dungeon. After the player would have defeated five bosses, the dungeons would rise from the sand, revealing one final gigantic boss the size of skyscrapers to test the player on all the previous learned skills. These skills would be: platforming, shooting, wall jumping, using a status field and a mechanic close to rocket jumping. In the end only one outside section, one dungeon and one boss was created in the final game. Due to time constraints.

The outside area trains the player on exploration and combat skills, needed in the dungeon. The dungeon trained players platforming, which they would use in the boss battle to scale the gigantic colossus and the final boss would test both combat and platforming at the same time.

The project was done with Daniel van Pel (creation of the colossus model including floating platforms), Thomas Deinum (Level design for the dungeon), Joris Daniel (Layered Audio) and me (Programming, Game Design for the boss battle and starting area and project management).

The game can be played here: http://www.verzijl.com/peter/game-downloads/colossus/ 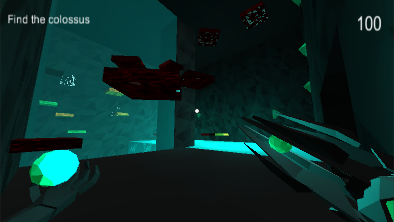 Inside of the dungeon area